Full disclosure, I’m not a fan of Vegemite itself, let alone on chocolate. Spencer, however, does like vegemite… on toast! So we bought a block to do our due diligence “market research” for our own chocolate flavours! 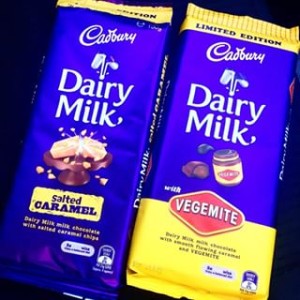 1. And the verdict is in – YUCK! So the Vegemite block is actually similar to the Cadbury caramel block with a thin layer of vegemite. It’s all a marketing ploy! And hats off to Cadbury because it has definitely worked. The entire country has gone into a frenzy over this chocolate invention, posting photos and writing reviews (like this one!). So hat’s off to Cadbury, but honestly a big waste of $2.50 (of course we would only buy cheap chocolate very cheap!). The Vegemite flavour is quite weak, as it is essentially a flavoured caramel instead of real vegemite.

2. And the verdict is in – YUM! So this block contained bits of delicious salted caramel candy in Cadbury’s regular milk chocolate. We will be adding caramel candy to our blocks very soon! We already have the butterscotch toffee bits which are similar. Honestly the only thing missing from this block was our premium Belgian chocolate instead of the cheap stuff! 🙂

Remember to tell us any ingredients you want! If we get repeat requests for certain ingredients we will expedite the process of adding them to our website so you can make your own in our Creation Lab! Our Creation Lab now includes Vegemite 🙂 Unlike Cadbury, it’s not a Vegemite flavoured caramel, but the real thing.

You can email us directly: hello@chocolab.com.au

Join our mailing list and we will send you all our latest deals, specials and product launches.

Use code 'chocoholic' at checkout to get 5% off.