If you shop at Coles you will have noticed that there has been a new addition to the confectionery isle: the “naked truth” chocolate bars and lollies.

I looked up their web site and they say they are for “thrill seekers, risk takers and chocoholics” – sounds exciting! The packets are transparent so you can actually see the bars and lollies, hence “the naked truth” (I have just assumed this, because there is not much information on their web site to this regard). It is very clever and I really like their presentation and the way they have branded themselves. When sitting next to Lindt and Cadbury, they have a very unique presence in the confectionery isle.

Another thing that separates them from their competitors is their flavour selection. They don’t offer the regular chocolate flavours, instead they opt for things like “lemon coconut cream pie white chocolate”. WOW! 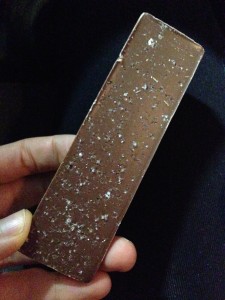 Veronique: I was thrown off a bit by the visible salt on top of the bar, and the taste of the salt i found very overwhelming. I don’t like the taste of the chocolate itself. The caramel is ok.

After his first bite spencer ran for a glass of water, finding the salt overwhelmed the chocolate and caramel, rather then having any subtlety in the saltiness. Despite his dislike for the chocolate, Spencer proceeded to polish off the rest of the bar anyway. 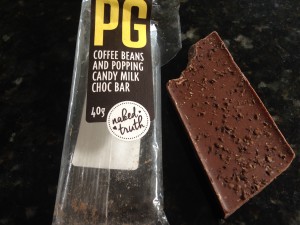 Again, not a fan of the chocolate. The ground coffee is nice. Can’t taste any popping candy. This bar is hard to break and share.

Spencer decided the chocolate doesn’t taste nice. he found it dry, and claimed it did not melt in your mouth like chocolate should. He liked the flavour of the coffee but found the popping candy had no ‘pop’. He couldn’t even finish this bar!

We also had a third party come in to taste this bar, and here are his thoughts:

Les: “I really like the texture of the ground coffee on my tongue. There is a too-sweet nasty taste of popping candy, without the pop. There are just a few small pops here and there, but not enough. The chocolate itself isn’t nice. “

The good: 1. You can see the bar. 2. They offer flavours and infusions in their Chocolate that are so unique and different so if you like a flavour I highly doubt you could find it anywhere but on their bars!

The bad: The first thing I noticed was the “vegetable fat” in their ingredients. This is standard in “cheap” chocolates. Using 100% cocoa butter (like in Chocolab) makes a more premium chocolate which is a lot more expensive to produce. Cocoa butter is obtained from whole cocoa beans, which are fermented, roasted, and then separated from their hulls. When you combine cocoa with vegetable fat, or hydrogenated fats as a replacement for some of the cocoa butter you end up with “compound” chocolate, which is basically not as nice and does not produce the smooth and creamy melt-in-your-mouth effect that chocolate should have. (Fun fact: In many countries when you add vegetable fat to chocolate it may not legally be called “chocolate”.). Lindt and Cadbury use Milk fat, so again, not as good as 100% pure cocoa butter chocolate.

The ugly: You would assume that with such unique flavours they would have done extensive testing and tasting first. Maybe they did, but we really think that in this department they failed. At least for the 2 bars that we tried.

VERDICT: When we buy supermarket chocolate, we will be sticking to Lindt or Cadbury. 🙂

And that’s the naked truth! 😉

Join our mailing list and we will send you all our latest deals, specials and product launches.

Use code 'chocoholic' at checkout to get 5% off.